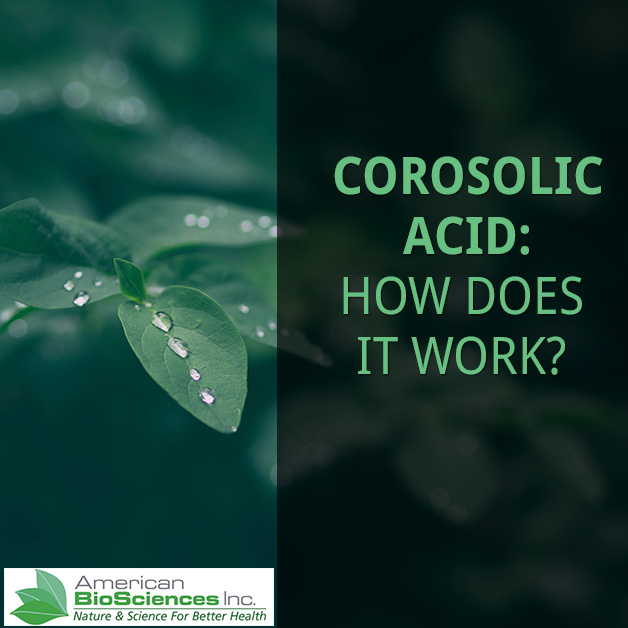 01 Nov Corosolic Acid: How does it Work?

Posted at 20:38h in Natural Health Supplements by adrian

Corosolic acid is a naturally occurring compound found in many plants around the world. One of the highest concentrations of corosolic acid is found in a green leafy plant from the Pacific called the Banaba plant. Its actions are similar to alpha-lipoic acid, which is human-made.

So how does it work? There are two possible mechanisms of action for corosolic acid. The first is that it may improve the sensitivity of the insulin receptor on all cells of the body. Insulin has to bind to this receptor to allow blood glucose to enter the cells of your body. If it does not bind to the receptor, this results in increased levels of insulin in your blood, which can damage the nerves, brain, eyes, and any other part of the body that is vulnerable to insulin damage. Corosolic acid improves the sensitivity of the insulin receptor by inhibiting a protein in the body called tyrosine phosphatase, which reduces insulin receptor site activity.

The second path of action for corosolic acid involves its ability to open an entirely new path in cells for insulin to enter the cell. This pathway is called the GLUT4 glucose transporter, which facilitates the uptake of glucose into the muscles of the body. This has a huge effect on blood glucose levels because there is so much muscle mass in the body.

Besides these mechanisms, there are also studies that show corosolic acid can inhibit our own body’s manufacture of glucose in a process called gluconeogenesis. This can have a considerable positive effect on blood glucose levels in the body. Corosolic acid has a long half-life in the body, which makes dosing simple and effective for a 24 hour period. Corosolic acid is a naturally occurring compound that has been used safely as a primitive herb, and now as a supplement. It has a very good safety profile, with no known side effects other than a possible allergic reaction. If you are a metabolic syndrome or pre-diabetes sufferer, it can be useful to enhance your health.